It’s that time of year again where my inner voice reminds me that I’m not doing a good a job in reading the Qur’an as I should. I read almost daily, but I don’t reflect on it as consistently. So this Ramadan, me and my siblings have begun (and hope to continue, with His grace) a mini “Qur’an Jammin'” discussion circle (halaqa) where we pick a small surah of the Qur’an and let it be the inspiration for discussion.

As an opening to these series, we appropriately chose Al-Fatihah (The Opening) of the Qur’an to be the focus of our first discussion.

Would you know that I have been reciting surat al-Fatiha all my life, multiple times a day. But it’s only when I sat down to analyze it that I realized how blindly I’d been reading it!

The first half of the small chapter is solely describing God. We must worship God, but it’s hard to worship One you don’t know, right? Knowledge is a prerequisite to love.

It was like my first time reading this. I suddenly realised that in such short a space of lines, two of God’s names were emphasized twice: ar-Rahman and ar-Raheem. While I know that both words stem from the root word rahma, meaning mercy, the exact distinction between them was fuzzy in my mind. So I did a little research by listening to an insightful audio lecture by Sh. Rateb el-Nabulsy. Let me share with you what I learned. 🙂 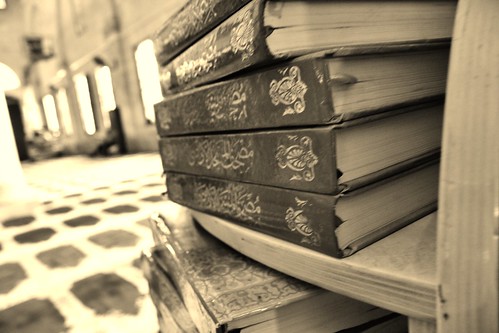 Both “rahman” and “raheem” come from the word “rahma”, which means mercy. So already we know both these words describe God as being merciful.

The full verse (ayah) is #54 from surat al-An’am, and it specifically mentions al-Raheem:

So rahman, raheem… what’s the difference? Let’s compare them and dive just a little bit deeper!

Mercy for ALL creation without exception.

Mercy reserved for specific people; the Believers who believe in Him and the last Messenger. Raheem is an exaggerated sense of راحم

It’s a high school graduation. Everyone gets the same high school diploma, regardless who did better overall or worse.

Everyone got their diplomas… but now special awards are given out to those most deserving, who put in the hardest work and it paid off.

Access to warmth from sun, light from moon, water to drink, a loving guardian’s care, etc.

Guidance to faith, baraka in time, enablement of good deeds through you or your offspring, etc.

Al-Rahman includes clear blessings that give us ease, but it also encompasses ta’deeb (discipline), in the form of disasters, pain, unfortunate circumstances. Sort of like a surgeon cutting someone open for a greater good.

As suggested above, al-Raheem deals with takreem (honouring).

5. Can humans have this quality?

Rahman is a quality unique to God. No one can claim to be as boundlessly merciful as the All-Merciful, All-Compassionate. So you are not allowed to name someone Rahman.

Raheem is a quality also accessible to man. We can be especially merciful to those we love more than those harming us! You are allowed to name someone Raheem.

God says of Himself:

Perhaps the greatest mercy of all is getting to experience paradise twice through al-Raheem’s will. In surat al-Rahman, ayah 46, God tells us:

The person who has taqwa, fears the awesome position of their Lord, receives two jannat (gardens). One is obviously the garden in Paradise, in the afterlife. The other garden is the paradise of this world.

I know what you’re thinking. Not all good-hearted and well-meaning people are living in heavenly bliss here!

But God doesn’t equate “paradise” in the dunya (world) the same way it is in the afterlife. In the afterlife, paradise will really be everything you desire and even more, because there is so much more pleasures there that the human mind cannot even comprehend or imagine. So the Jannah is guaranteed to be bliss in all categories: mind, soul, body, otherworldly sensations – you name it!

But the jannah (paradise) of this world is more on a metaphysical level. This is an inner paradise that anyone truly sincere in his religion can attain… even if they’re in a war zone, in terrible financial situations, stuck between a series of unfortunate events. There are some things simply beyond human control, like these factors. But one thing we have power to do, if we want to do it for our soul and not for show… is get closer to God. Know Him in whatever small capacity you can. Strive hard to be sincere and honest and humble. Through this, and with al-Raheem watching over you, you might attain sweet feelings of closeness with God and certainty in His message.

Imam Hasan al-Basri said, “If the kings and sons of kings knew what joy we experience through this knowledge, they would have fought us over with with swords!”

May we all be among the blessed people who can experience paradise in this world, before seeing it in the next. Ameen, ameen, ameen!